The Port of Seattle is home to the busiest cruise port on the west coast of the United States.  It, along with the Port of Vancouver, is one of the two departure ports for Alaska-bound cruises.

There are two separate cruise terminals in Seattle:

The Bell Street Pier Terminal is located right in the heart of Seattle. It handles Oceania and Norwegian cruises only.

Alamo, National and Enterprise each have rental kiosks at both cruise ship terminals. 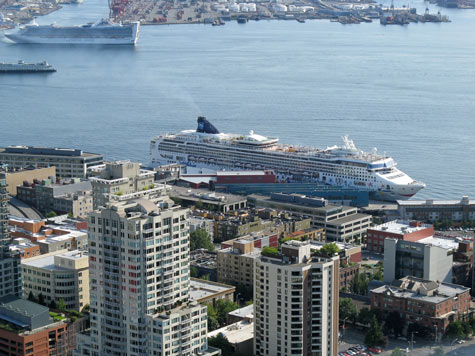 Many of Seattle's top attractions are located within walking distance of the Bell Street Pier Cruise Terminal.  They include the Space Needle, Pioneer Square and Pike Place Market.

Vancouver British Columbia is located just three hours north of Seattle.  It is a popular travel destination that can be easily reached by coach from downtown Seattle or SEATAC airport.

Map of the Seattle Cruise Port

The two cruise terminals (Port Pier 66 and Pier 91) are located right in Seattle.

View map of the Port of Seattle.

Average temperatures in Seattle Washington are as follows:

Internet access is available free at many cafes and restaurants in Seattle, including McDonald.