Livorno is an important seaport on the northwest coast of Italy.  Although the city itself has few tourist attractions, Livorno is the gateway port for the following Italian cities:  Florence, Pisa and Lucca. 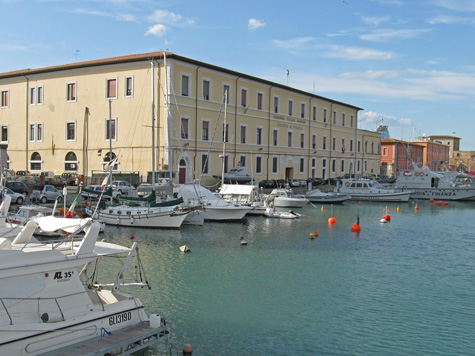 Ask your cruise representative if the cruise line offers shuttle service to either the Livorno town centre or to the Livorno Central Train Station.

Livorno does not have a metro sytem.

The central train station in Livorno is situated quite far from the cruise port.  Consequently, you'll need to walk to Piazza Giuseppe Micheli (at the end of Grand Via) and take bus #1 or bus #1R to the train station.

The cities of Pisa and Lucca, however, are nearer to Livorno.

Livorno is an important ferry terminal for destinations in France (Bastia, Vecchio), Spain (Barcelona) and the offshore Italian islands.

Ferries leave from the Port of Livorno, not far from the Genoa cruise ship terminal.

Although the city of Livorno does not have many tourist attractions, it is a pleasant community to explore.

Florence is certainly one of the most beautiful and interesting cities to visit in all of Europe.  Unfortunately, it is located approximately 75 miles from Livorno and the Livorno Central Train Station is situated far from the cruise port.

Although it might be feasible to purchase a ship-sponsored tour directly from your cruise ship, it will certainly cost a lot of money.  You'll also have very little time in Florence after the long drive.

The city of Pisa is certainly well within striking distance of the Port of Livorno.  Top attractions include its famous leaning tower, the Pisa Cathedral, and Field of Miracles.

You can reach Pisa by train from the Livorno Central Train Station.

Lucca is another beautiful community in Tuscany and well worth visiting.  It is located a little further from Livorno than Pisa, but much closer than Florence.

You can reach Lucca by train from the Livorno Central Train Station.

The currency used in Italy is the Euro.

Average daily temperatures in Livorno Italy are as follows:

Free WiFi access is available at the McDonalds restaurant in downtown Livorno.