The Vancouver Cruise Terminal is the departure point for most Alaska bound cruises.  Many transpacific and coastal cruises also depart from this picturesque port.

The Vancouver Cruise Terminal is conveniently located at Canada Place in the heart of downtown Vancouver.  The Vancouver Convention Centre East is located in the same facility.

Due to its central Vancouver location, a port shuttle in not required.

The Canada Line connects the Vancouver cruise port with Vancouver International Airport (YVR).  The SkyTrain transports passengers from downtown Vancouver to the eastern suburbs.  Waterfront Station is located one block east of the cruise terminal.

The Vancouver SeaBus travels connects Waterfront Station in downtown Vancouver to the city of North Vancouver.

The hop-on hop-off bus picks up passengers directly in front on the cruise terminal.

Coach service is available from downtown Vancouver to Victoria, Whistler, Seattle and Seattle Airport.  The coach to Victoria travels via a ferry boat to Vancouver Island.  The 1.5 hour ferry ride is included in the cost of a ticket. 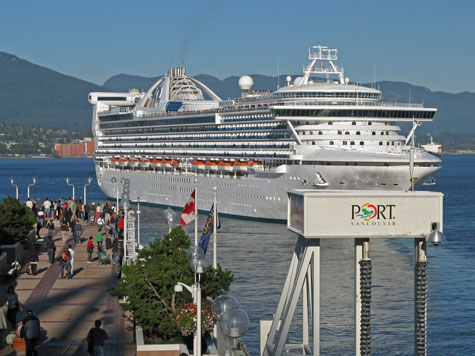 The top attractions in Vancouver include the following:

Whistler BC is the picturesque mountain resort community is 129 km (90 minutes) north of Vancouver.

Access the Whistler Vacation Guide to learn about this popular destination.  It can be accessed easily by coach from Vancouver or Vancouver International Airport.

Map of the Vancouver Cruise Terminal

The Canadian Dollar (CDN) is used in Canada.  It is worth approximately USD $0.75.

Weather in Vancouver BC

Vancouver enjoys a mild climate throughout the year.  The best time of year to visit is between May and October.