There are three main cruise ports in Stockholm.  They are:

Visit www.portsofstockholm.com to determine where your cruise ship will dock.

Make sure to enjoy the approach to Stockholm as your cruise ship navigates through an archipelago of 24,000 islands.

Shuttles from Frihamnen to the town centre are available for 12 euro per person.  They depart every half-hour and travel between the port and the Royal Palace.

From Frihamnen, bus #1, #76 or #91 will drop you off in town. Tickets can be purchased from a machine or the attendant at the adjacent building.

From Stadsgarden, a number of buses will take you right into town, if you don't want to walk 30 minutes.

Visit sl.se for comprehensive information on public transit in Stockholm.

A hop-on bus service is available.  There are bus stops located at the Frihamnen Cruise Line Terminal, at the Stadsgarden cruise terminal and in the Old Town. Buses depart every 30 to 45 minutes.

A 24 hour ticket costs approximately 300 SEK (or 400 SEK if combined with the Hop-on hop-off boat service).

There is a dock for the Hop-on Hop-off Boat Service (200 SEK for 24h) located at the Stadsgarden Terminal (end of pier). Boats depart every 45 minutes. 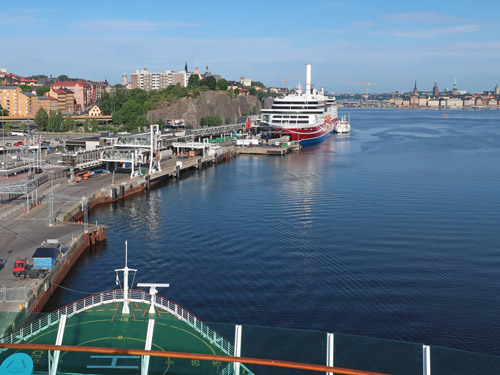 Popular attractions include the following:

The national currency of Sweden is the Swedish krona (SEK).

The weather in Stockholm is cold in winter and mild during the summer months.

Wifi is not currently available at the cruise terminals.