The Tenerife Cruise Port (Puerto de Santa Cruz de Tenerife) is the largest cruise port in Spain, other than the Port of Barcelona. It is located on the northeast coast of the island.

Because the Port of Tenerife is one of the deepest ports in the world, it can accommodate very large cruise ships.

Santa Cruz is approximately 1 km from the cruise ship port.

The Port of Santa Cruz provides a free shuttle service from cruise ships to the cruise terminal and port exit.  Sometimes, the shuttles will take you right to Plaza de Espana in the city centre.

A large bus station is located on Avenida Tres de Mayo. It serves the entire island and is located 2.5 km from the cruise port.

A tram line runs from the central bus station to the UNESCO World Heritage community of La Luguna.  The tram leaves every 10 minutes and costs €1.30. Travel time to Laguna is approximately 40 minutes.

The Hop-on Hop-off bus makes 11 stops around Santa Cruz, including at the following attractions:

One of the stops for the Hop-on Hop-off bus is located on Avenida de Anaga near the Port Gate.  Another stop is at Plaza de Espana (the central square).

The hop-on bus travels around Santa Cruz de Tenerife.  It does not travel outside the city. 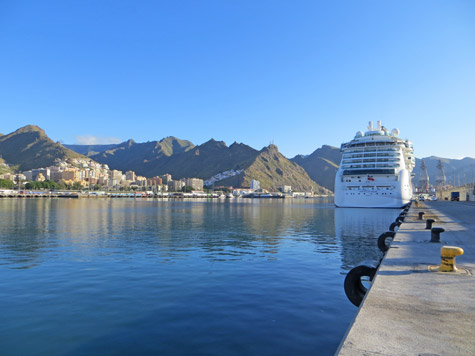 Top attractions in Santa Cruz include the following:

Popular attractions elsewhere on the Island of Tenerife are:

To learn more about the Canary Islands, please access the Guide to the Canaries.

Tenerife is a Spanish island and consequently uses the Euro.

The following cruise lines include Tenerife as a port-of-call on European and/or Trans-Atlantic cruises:

Free WiFi access is available at many cafes and restaurants in Tenerife.