The Barcelona Cruise Port is located about 3 km southwest of the Old City. It is called Muelle Adosado and handles most (but not all) cruise ships.

There are four modern cruise terminals (labeled A though D) at the cruise port.

A tourist information booth operates at each of the terminals.  A fifth one is located at the Christopher Columbus Monument on Las Ramblas.

A shuttle bus (#T3) connects the four cruise terminals with Old Madrid (Christopher Columbus Monument).  There is a metro station near the monument.

A one-way bus ticket costs €2. Buses run to the cruise terminal ever 20 minutes.

Alternatively, a taxi ride covering the same distance will put you back around €15.

Ferry Service is available from Barcelona to Mallorca, Menorca, Ibiza, Alcudia, Tangier and a number of destinations in Italy. 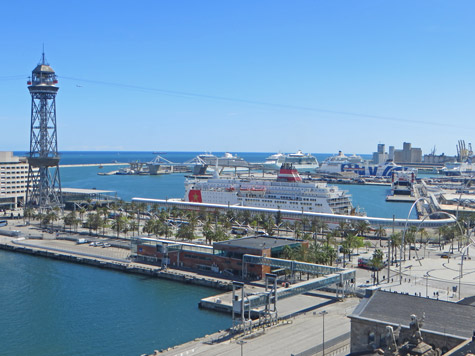 Top tourist attractions in Barcelona Spain include the following:

Catalonia is the region situated in the northeastern corner of Spain. Barcelona is its capital and largest city.

The Euro is the official currency of Spain.

The city of Barcelona enjoys a Mediterranean climate with mild winters and warm summers.

Average monthly temperatures (celcius) and precipitation (millimeters) are as follows:

Internet access is available in each of the four cruise terminals.