The cruise port on the Island of La Palma is conveniently located just five minutes from the capital city of Santa Cruz de La Palma.

La Palma is one of the islands in the Canary Island archipelago.

Cruise passengers arriving in Santa Cruz can simply walk along the Avenida Maritime Promenade to the city's Old Quarter.  Plaza de Espana is the city's central.

Free shuttle bus services is provided by most cruise lines to shuttle passengers between their ships and the cruise terminal.

There are approximately 20 bus routes on the island of La Palma. A single bus fare cost two euro or less.

Ferry service operates from La Palma to other destinations in the Canary Islands: 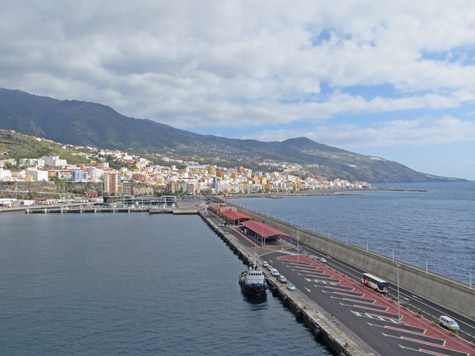 Top tourist attractions and landmarks in Santa Cruz are the following:

The island of La Palma is relatively untouched by tourism and is considered by many to be the most beautiful of the Canary Islands.

The Island of La Palma is an integral part of Spain.  Consequently, the Euro is the official currency on the island.

Internet service is available at Internet cafes, restaurants and in shopping malls.