Dunedin NZ is located on the east coast of New Zealand's South Island.  It is a city of 130,000 residents and a popular port-of-call for cruise passengers.

Most cruise ships dock at the Port Otago Cruise Terminal at Port Chalmers (a suburb of Dunedin).  It is approximately 15 km northeast of the Dunedin city centre (the "Octagon").

Small ships can, however, dock at a wharf right in Dunedin.  It is located just 1 km from the city centre.

Visit the Port Otago website to determine where your ship is to dock.

A shuttle bus service runs between the Port Chalmers and downtown Dunedin. Travel time is approximately 30 minutes and the fare is NZ$20 return.

City bus stops are situated on the main street of Port Chalmers, 100 meters from the berths. The #14 bus departs approximately every 20-30 minutes weekdays and hourly on weekends.  The fare is about $5.00 each way. See bus schedule for details.

The taxi fare between the Port Chalmers and Dunedin is approximately NZ$45. 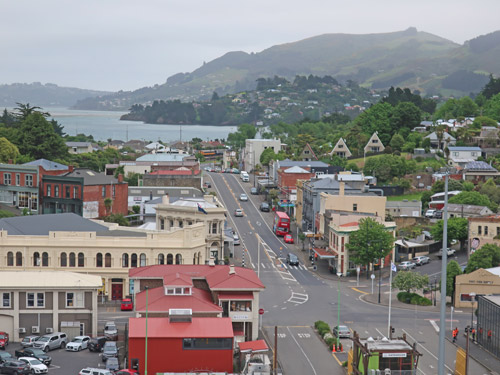 Attractions in this small town include heritage buildings, a Maritime Museum and a few shops and restaurants

Dunedin is a picturesque town that resembles Edinburgh Scotland. Top attractions in the city include Larnach Castle, George Street and Princess Street.

Map of the Dunedin Cruise Port

The currency used throughout the country is the New Zealand dollar.

Average daily temperatures by month in Dunedin area as follows: