The cruise terminal in the Principality of Monaco is located next to Monaco's picturesque yacht harbor.

The modern terminal has an adjacent tourist information centre.  It is within walking distance of the Old Town and many local attractions.

Some cruise ships anchor in the bay and their passengers are transferred via tender boats to shore.

Visitors to the principality can either climb a rather steep hill from the yacht harbor to the Cousteau Museum or catch a local bus up the hill.

The Monte Carlo district of Monaco (where the famous casino is located) is much further away from the cruise terminal but can nonetheless be on foot.

Bus service connects the yacht harbor to both the Old Town and to Monte Carlo.

Service is also available to Villefrance-sur-Mer and Nice France.

Train service is available from Monaco to Nice France, however, the Monaco train station is located quite far from the cruise terminal. 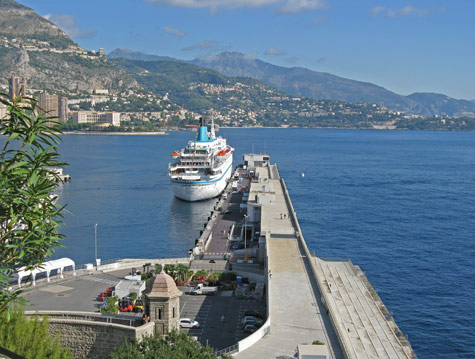 Popular attractions in Monaco include:

Although surrounded on three sides by France, the Principality of Monaco is actually an independent city state.

View map of the Port of Monaco.

The official currency in the Principality of Monaco is the euro.

The weather in Monaco is temperate.  The principality receives much of its precipitation in the autumn months.