Because the Melville Street Cruise Terminal is located in the heart of the city, one does not need to catch a port shuttle.

Taxis are plentiful around the cruise port and in the town of St. Georges.  Fares are set by the government.  A taxi ride to Grand Anse Beach will put you back approximately #10

A water taxi service  operates between the Carenage and Grand Anse. A one-way fare costs $4. 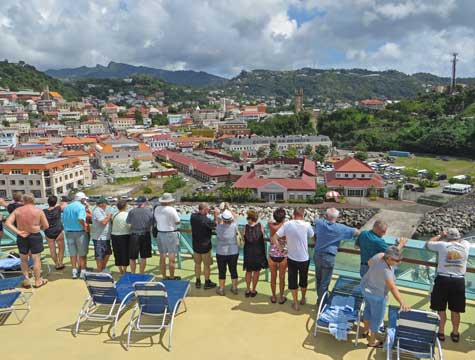 St. George's is considered by many to be the most picturesque port in the entire Caribbean.  It features lush mountainous terrain and interesting colonial architecture.

The Grenada National Museum is a good place to visit to learn about the island's history and culture.

Other popular attractions include:

Visitors will enjoy the aroma of spice trees as they explore the island of Grenada.  They include nutmeg, cloves, ginger and cinnamon.

The extinct volcanoes in the Grand Etang Forest Reserve are popular tourist attractions on the island.  Visitors will enjoy amazing vegetation and an assortment of birds around the lake in the reserve.

Snorkeling and scuba diving are popular activities on the west side of the island where there is an offshore reef and shipwreck.

The official currency in Grenada is the Eastern Caribbean Dollar (XCD).  The US dollar, traveller's checks and credit cards are, however, widely accepted.

Average daily temperatures in Grenada are as follows: