The cruise ship dock in Mazatlan is located in the commercial port area.

From the modern new cruise terminal, passengers can walk to the "Old Town" by simply following the blue-lined cobblestone walkway for one mile.  It is a pleasant walk through an attractive residential district.

A free tram shuffles passengers from cruise ships to the cruise terminal.  Passengers can then walk one mile to "Old Mazatlan".

The "Golden Zone" hotel resort and beach district is about four miles from the cruise port.

There are at least six different bus routes in Mazatlan. 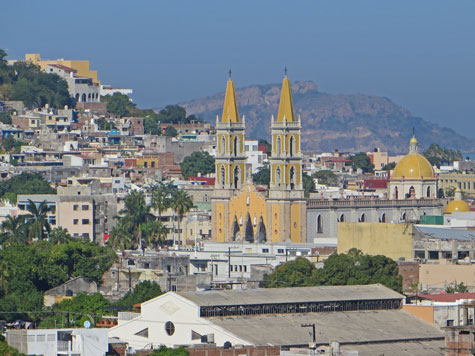 Top tourist attractions in Mazatlan are the following:

The currency in Mexico is the Peso.

The weather in Mazatlan is pleasant all-year round.  Average daily highs range from 25 celcius in January to 32 during the summer months.

Most precipitation falls during the summer months.

Free internet access is available at Starbucks and the Purple Onion in Mazatlan.