The cruise ship port that serves Athens Greece is located in nearby Piraeus.  Piraeus is also the departure point for dozens ferries that travel to the Greek Islands.  The cruise terminal is called Megas Limin (Great Harbor).

Thanks to an excellent metro system between Piraeus and Athens, access to the top Athens attractions is simple, fast and inexpensive. 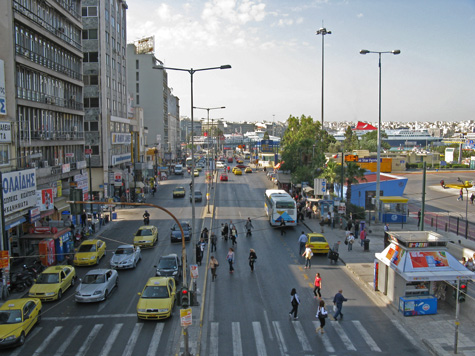 Many cruise lines offer a free shuttle service between the cruise ship and the metro station in Piraeus.   Otherwise, passengers can walk (15-25 minutes) or catching a bus or cab.

The Athens Metro System is massive.  It connects the Port of Piraeus with downtown Athens as well as the Athens International Airport.  The Syntagma Square Metro Station is a good place to start your walking tour of Athens.

Although bus service operates between Piraeus and Athens, it is normally faster to take the metro and avoid Athens traffic.  Look for bus #40 which runs to Syntagma Square in central Athens.

Train service operates from Piraeus and Athens to various points in Greece and abroad.

Ferry service operates daily from the Port of Piraeus to many of the Greek Islands.  For those wishing to experience a pleasant nearby Island, the Island of Agina is a great place to visit.

Athens Greece is a world-class tourist destination and is home to some very interest attractions.  Some of the most popular are the following:

Cruise ships dock at Megas Limani in Piraeus, which has 11 berths and two cruise terminals. The cruise terminals are close to the center of town, close to train and bus links that connect to downtown Athens and the Athens Airport.

Terminal A (Miaoulis) is situated near Gate E11 in the center of the harbor. It  handles small to medium cruise vessels

Terminal B (Themistocles) is located closer to the harbor entrance and gate E12.  It is used for larger cruise ships.

The currency used in Greece is the Euro.

Free WiFi access is available in Cruised Terminal A.