The terminal is located off George Street, in the "Rocks" area of central Sydney.  It is a short walk from Circular Quay, the transportation hub.

Due to its central location and proximity to public transit, a port shuttle is not required.

Cruise passengers can take the T8 train directly from the international airport to the Circular Quay Railway Station.  This station is a short 10 minute walk to the cruise terminal.

Ferry service is available from the Circular Quay Wharves to various locations in and around Sydney including Bondi Beach.  There are a total of 8 ferry lines. 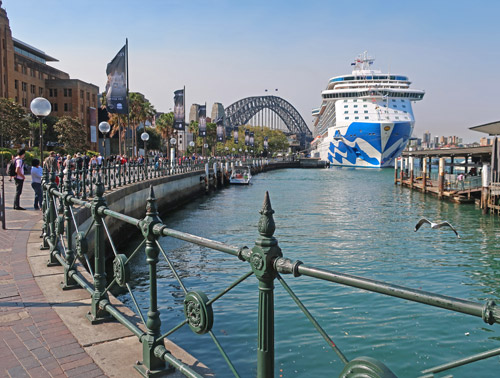 Sydney is home to many world-famous landmarks including the Sydney Harbour Bridge and the Sydney Opera House.

The currency used in Australia is the Australian dollar.

Average daily temperatures by month in Sydney are as follows:

Free WiFi is available at the cruise terminal and at the McDonald's Restaurant at Circular Quay.